Yabun is one of the largest celebrations of Aboriginal and Torres Strait Islander survival, cultures, peoples, art and community in the country, and 2019 was no different.

This year Yabun grew to become a week of events, including a Sunset Ceremony, Kids Disco, and for the first time, a Yabun Movie Night hosted by the NCIE and Gadigal Information Services. 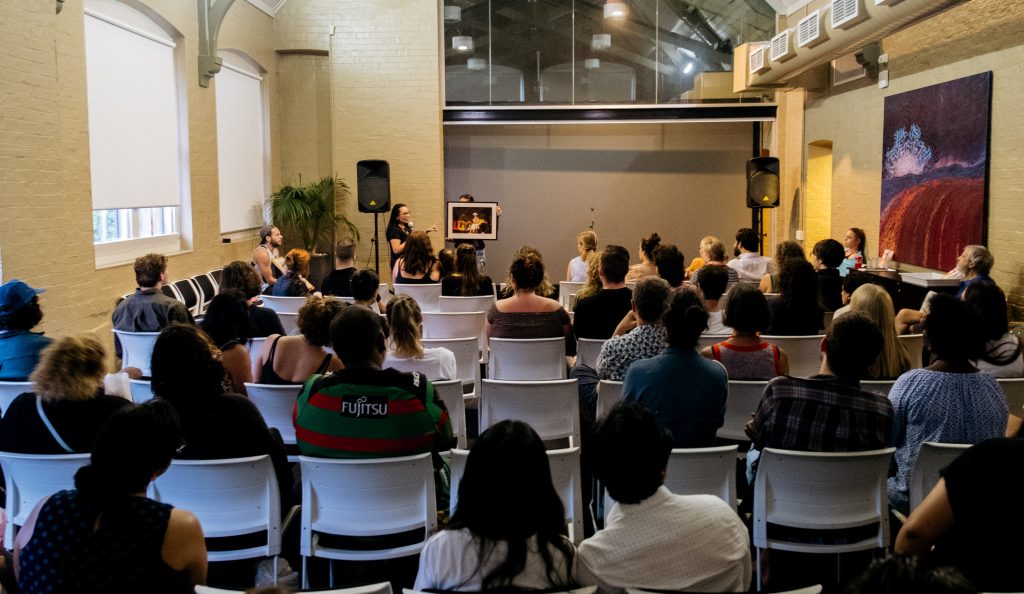 The Yabun Movie Night at the NCIE

While Yabun has marked 26 January in Sydney since 2001, it has its roots in the first Building Bridges concert held in 1988, a concert in support of the huge protest march held in Sydney that year.

The Yabun movie night featured the film, “88”, a documentary about the events leading up to the 1988 March for Freedom, Justice and Hope. MC Angeline Penrith, reminded everyone of the importance of Yabun’s 2019 theme, ‘Spirit of Survival’ through her spoken word which urged everyone to confront Australia’s history, and honoured the people that marched in 1988. Linda Burney MP shared her stories from the 1988 March for Freedom, Justice and Hope

Federal Member for Barton and proud Wiradjuri woman, Linda Burney MP brought her firsthand experience and memory of the 1988 march to introduce the film. She also brought along photos from the march, and the outfit she wore on the day (pictured below)! Linda said that “seeing and hearing at the end of the march that thousands of people from all parts of the Australian community had come together to recognise the history of this country was an incredible feeling.” Aboriginal communities from as far south as Tasmania, and as far west as the Kimberley and Perth, made their way to Sydney for the 30,000+ strong march.

Thanks to everyone who came and made it such a special event. Thanks also to the speakers on the night Angeline Penrith and Linda Burney. We don’t think anyone who attended will forget Linda’s fantastic Aboriginal flag dress in a hurry!

After a week of events leading up to Yabun, the day of the festival at Victoria Park, Sydney arrived, along with the sizzling temperatures. The NCIE team were up and at it on the day, with every part of the organisation working hard to make sure that visitors would get to know the NCIE through our activities and information on the day.

For the first time, NCIE’s Job Ready program set up a food truck, selling delicious pies, scrolls, cookies and wild rice salads. They did an awesome job, and were able to show festival-goers the skills passed on to young job-seekers through the program. It was also a great opportunity to showcase the delicious food on offer at NCIE Catering. The IDX Team set up Virtual Reality and Parrot Drone workshops at the Young, Black and Deadly Hub, with children coming back several times because it was so much fun. NCIE Fitness Trainers trained people on the exercise bike, showing how exercise gives the same hit of endorphins as a cigarette- without damaging your body. They also answered any questions that people had about NCIE’s Fitness Centre. NRL stars Taleena Simon and Lavina O’Mealey were there to say hi and talk about living an active and smoke-free lifestyle. The numbers at the festival swelled with the early afternoon arrival of thousands of marchers from the Invasion Day Rally who stayed on to take in the mainstage music and the Corroboree Ground dancers, to listen in at the Speak Out tent and enjoy everything else Yabun 2019 had to offer.

Thanks to everyone who came down to Yabun or to the Movie Night (or both!). Check out more photos from the day on NCIE’s Facebook.